The Pyrénees has been a special journey for me. I started them just two years ago really by accident. I was walking with my Swiss companion from Cahors and we ended up using the GR10 to get from St Jean Pied de Port to Irun. In those first five days the mountains stole my heart. Last year  walking from St Jean Pied de Port to Bolquuere. This year I finished them in Banyuls sur Mer. I have covered this in another post. I mention it here because any walk would have to be special to satisfy me after the Pyrénées.

I left my new friends and tried to get to Le Puy en Valey to start the Stevenson Trail. The Stevenson Trail is named after the author Robert Louis Stevenson who fist walked it 1878 with a donkey called Modestine. He was distraught over a woman called Fanny Osbourne, whom he later married. He later published Travels with a Donkey in the Cévennes. The trail is now based on this journey between Le Monastier-sur-Gazielle and Saint-Jean-de-Gard.

The day Tuesday 10th September that I left Banyuls to get to Le Puy there was a train strike. There was only a small number of trains in operation that day. It took me 12 hours I was hungry and tired by the time I arrived in Le Puy. Could not get accommodation in a Gite, then found a soulless hotel. All the main restaurants had then closed. The one restaurant that I found I walked out of because I was sitting 15 minutes waiting for my order to be taken. A half bar of chocolate was all the food that was left in my backpack. I eat it and went to bed.

The following day I walked to Pradelles a nice walk through lovely countryside. I was still restless, the buzz I got from the Pyrénées was not there. It reminded me of some nice Camino walks I have done. I had a lovely meal in a great Gite called Terre d'Accueil. Now I have to change route slightly as there was an accommodation crisis ahead because of a major Motorbike Mountain Rally. Instead of going to Langogne or Cheylard-l-Éveque I would have to take a different route which was a Pilgrim road. It is the GR 700 Voie Régordane which would again join up with the Stevenson Way. I was to stay in the Monastery of Notre-Dame des Neiges. 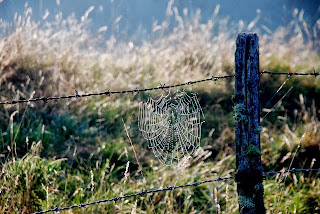 I left Pradelles on a cold but sunny Saturday morning. The tiny country pathways were full of silver cobwebs in a glistening morning sun. The light was amazing. There was now a great spring in my step. I was now not on the Stevenson trail, I was told the marking to the Monastery might be difficult to find. It was not difficult to find, in fact it is clearly marked. The weather had got better it was warm, there was also climbing involved. Near the Monastery I heard a lot of gunfire which was quite common the last 5 days as it is hunting season. I then meet two hunters one of them had just shot a Boar. I photographed him proudly holding the recently deceased. A week later I had wild Boar for dinner, it was nice. 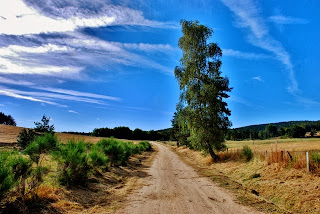 I then shortly arrived at the Monastery of Notre-Dame des Neiges. I was meet by a very elderly Monk, they were all elderly it is an ageing collection of monks, there seems to be little new blood. Stevenson stayed here on the 26th September 1878. Robert Schuman who was Prime minister of France twice, took refuge here during the Second World War. They have a thriving gift shop where they sell home made products, sweets, cakes, preserves, beer, wines, calenders, cards books etc. . There was a coach load of visitors eagerly buying the lovely produce served by a Nun at the cash register busily scanning the products. The ladies at the checkout of Tesco Sligo were never dressed like this, I started to smile to myself. I then went to Vespers at 6.30 pm, a very special moment indeed. The communal dinner was great, good company and flowing conversations in a few different language's one of which I understood. I had a little bedroom to myself and slept soundly.


I had a great breakfast and said goodbye to the Monastery and its excellent hospitality. I had a great walk through mountains, forests, pretty villages and past the Viaduct at Mirandol

This walk is now really taking shape. I have a few more days and I will be in Florac. Then I have decisions to make. I am going to spend a couple of days with two friend of mine who live in the Tarn Gorge. Will I go back to Florac and continue the Stevenson trail, this is a safe option the route is well marked, I have the guide book, no need for detailed maps. Or will I do something else. Firstly I have to get to Florac. I have a great climb up Mont Lozere and climbed the highpoint of the Stevenson trail which is the Sommet de Finiels, which of course reminded me of the Aubrac which I walked last year. It is only about 20km in a straight line away from the Aubrac. Great views from the top and a great feeling . Then down to Finiels and on to the picture postcard town of Le- Pont de-Montvert.

Nice climb the following morning through beautiful and historic landscape. I should mention here the deep history attached to this area regarding Les Camisards.  Camisards were Hugenots, French Protestants of the Cévennes, who raised an insurrection against the persecutions which followed the Edit of Fontainbleau in 1685. The revolt by the Camisards broke out in 1702 with the worst of the fighting up to 1704, then sporadic fighting until 1710 and finally a peace by 1715. The war really started in Le-Pont-de-Montvert with the assassination of Francois Langlade the Abbé Chaila. He had arrested and  tortured a group of Protestant trying to flee France.  Much blood had been spilled in this beautiful countryside I was now walking, this is in fact the reason why Stevenson had chosen this area.

I arrive in Florac. I had contacted my friends several days earlier to say that I would arrive in Florac at 3 pm. I was very proud of my advance calculations and at exactly 3 I sat down for a coffee at the war memorial. It was great to see Leo and Bridget again. We then drove to their home in Sainte Enimie which is one of Les Plus Beaux Villages de France. We stopped at some beautiful places in the Tarn Gorge, then a lovely dinner and much talk late into the night. The weather had not been great the last few days and I wanted to finish my journey in good weather. I had even looked into the possibility of leaving the Cévennes and going to Provence.

The following day was grey and wet (one of the few in that area). I spent many hours on the computer I booked my flight from Carcasonne. That then meant I would stay in the general area of the Cévennes and not Provence. Big full sized maps were put on the table. The immense beauty of the area lay in front of me in lines and contours of different colours and shades. Why not leave on foot from here and still finish in St-Jean-de-Gard Stevensons finishing point. I wrote the names of little villages and mapped out a route on a few scraps of paper, it was decided with much help in planning from Leo, I was to walk through the Tarn Gorge to Le Rozier - Peyreleau, Meyrueis, Mont Aigoual and somehow on to St Jean de Gard or some other finishing point.

Breakfast with my lovely hosts, waited for the local Boulangerie to open at 8 am, it didn't and at 8.20 am I said goodbye and off I went. This was a new adventure for me. I would normally have a guidebook to follow or exact route marking. This was not the case. The following five days would bring me on local unmarked tracks, local marked tracks many different Grande Randonnée (GR) whom all incidentally have the same red and white marking, cattle tracks, country roads and in one case hitch a lift. This was the less trodden way, my feet brought me to places that other people would refer to as getting lost.

The sun shone for those five days. I chased illusive butterflies with my camera.  I sat high up on Cliffs in the Gorge eating bread and cheese. The sweat rolled down my neck at 9.30 in the morning. I checked maps of local hikers I meet along the way, much smiling and nodding to make up for insufficient knowledge of their language. So tired at the end of day that I would go to bed without having a shower, will have one in the morning.Smiling to oneself realizing how really lucky I am to do what I am doing. Enjoying the actual moment and not just a retrospective view of it. Taking photographs I will be proud of.

I have given some detail in my blog of what I done in those five days and I wont repeat it here. There are a few things I will mention. The advice I got to choose this route. The kindness of a group of French hikers from Montpellier and the lady who drove me about 40km to Soudorgues. Getting a bag of Cévennes onions presented to me.  The game of Pétanque that continued until 4 or 5 am outside my widow in the tiny  mountain village of Soudorgues. Carrying 4 ks of onions in my backpack 22 kms the following day so I could eat them in Ireland and remember the great hospitality I received. Eating wild Boar in a tiny Gite d'Etapé. Enjoying the rewards of leaving the well trodden path and letting my feet take me on a journey that is not mapped out in every step. Sitting down to amazing local food in remote country places. Oh the French Food! Looking down at clouds from a mountain peak. Looking down at high mountains from an even higher mountain. Looking at my favourite outline, that of different shades of misty blue  mountains, forever into the distance. I can still see them. 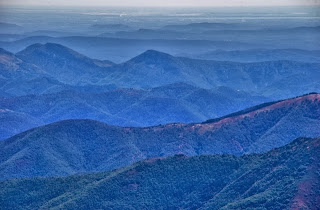